Top things to know about the moon and the menstrual cycle

We are often asked to add lunar cycles into Clue, so we ran the numbers to check it out, scientifically. Does the menstrual cycle synchronize with the lunar cycle? Not according to an analysis of over 7.5 million cycles. ?

Our data science team analyzed 7.5 million cycles and found no correlation between the lunar phases and the menstrual cycle or period start date.

“What you normally hear is that you ovulate around the full moon and get your period around the new moon,” said Dr. Marija Vlajic Wheeler. Wheeler is a Data Scientist at Clue who also has a PhD in Astrophysics from the University of Oxford and spent three years as a postdoctoral researcher at the Leibniz Institute for Astrophysics in Potsdam, Germany.

“Looking at the data, we saw that period start dates fall randomly throughout the month, regardless of the lunar phase.” —Dr. Marija Vlajic Wheeler 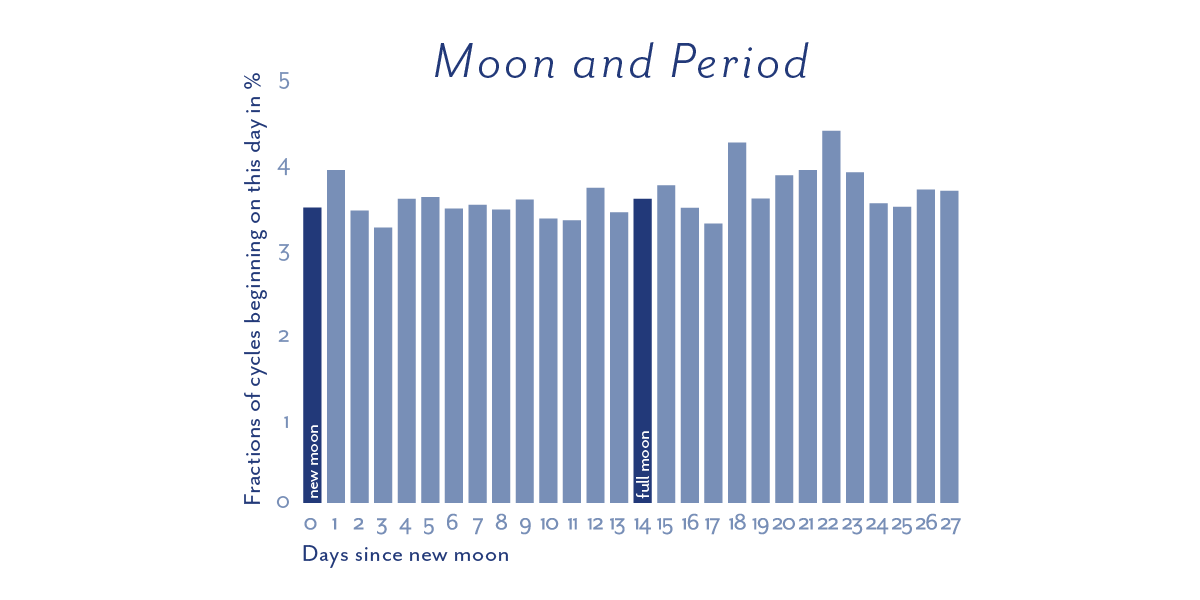 Wheeler looked at period start dates for 1.5 million users of Clue who had not tracked the use of any form of hormonal birth control. For their 7.5 million cycles, she found no indication that the period predominantly starts during the new moon, a relationship that is often suggested between lunar and menstrual cycles.

The global average menstrual cycle length is 29 days and the lunar cycle lasts 29.5 days (though it’s normal to have menstrual cycle lengths between 24 and 38 days). Statistically speaking, assuming that periods start at random times, about 1 in 2 people will have their period start ±3 days from either the full or new moon.

Menstrual cycle length can vary by age and racial-ethnic background though (1), so this may not even occur among all groups of people. This may contribute to creating a false impression that the period does or should start on schedule with the moon for everyone.

The lunar and menstrual cycles will correlate more or less for some people, depending how closely their average cycle length matches the lunar cycle, and the variability of their cycle length.

The analysis done by Dr. Wheeler for Clue is the largest analysis ever done looking at the relationship between menstrual cycle and lunar phase, but it’s not the first.

Two studies were conducted by the same author (2,3). In these studies, the primary research question was whether there was a relationship between the lunar and menstrual cycles among people who specifically had menstrual cycle lengths of about 29.5 days (2,3).

The first of these two studies, from 1980, found that 47 out of 68 participants who had eligible cycle lengths (69%) had their periods between the first quarter and the last quarter of the moon cycle, also known as the “light half” (2). This is phase of the lunar cycle where there is a full moon. Because it is statistically unlikely for this percentage of people to menstruate during this time, the authors concluded that there was an association between lunar phase and the menstrual cycle (2).

The second study from this author, published in 1987, was bigger - they analyzed data from four samples of participants gathered between 1976 and 1983 (3). As in the first study, only people with menstrual cycle lengths of about 29.5 days were used in analyses.

The authors used these data to create four histograms, a particular type of graph. On the x-axis (horizontal axis), they plotted the day of the moon cycle. On the y-axis (vertical axis), they plotted the percentage of participants in that sample who started menstruating on a certain day of the moon cycle. The “statistical” question was whether the distribution of menstrual start dates looked like a flat line—meaning no relationship to the lunar cycle—or if it was not flat—suggesting a possible relationship to the moon cycle. If the plot had a flat line, this means that the number of people who start menstruating is approximately equal on all days of the lunar cycle.)

In general, participants were more likely to menstruate during days 10 to 20 of the moon cycle than at other times—approximately around the time of the full moon, but only two of the four graphs had plots that were significantly different from a flat line (3).

Even among the “statistically significant” plots, the difference between days was small. For example, in the plot for data gathered in Fall 1977, about 2.2% of participants menstruated on the new moon (day 1 of the cycle), while about 4.4% menstruated on the day after the full moon (day 16) (3).

Another study from a different author reported similar results (4). In this study from 1981, researchers again found that people with cycle lengths of about 29.5 days were more likely to menstruate during the light half of the lunar cycle, particularly between the 3 days after the first quarter and 3 days following the third quarter (4). About 1 out of 3 people in the study had cycle lengths of about 29.5 days (4).

Although these results are interesting, they don’t show that most people have synchronous cycles with the moon - between 22% and 32% of participants in these studies had cycle lengths of 29.5 days (2-4), meaning most people will ovulate randomly throughout the lunar cycle. Also, the difference in the proportion of people starting to menstruate was small, and it would have been informative to have studied these people for a few months to confirm that there was an actual pattern as opposed to the results being just due to random chance.

In another study from 1962, researchers found slightly different results. In this study, participants, aged 14-18, were more likely to start menstruating during the light half of the lunar cycle, though specifically around the first and third quarters (5). These participants could have menstrual cycles of any length. This result is unexpected, as the authors of the previous studies (2-4) and our study concluded that, on average among all people with cycles, menstrual start (the first day of the period) occurs randomly over the course of the lunar cycle.

However, in contrast with the previous studies, a study from 1986 found that people were more likely to menstruate during a new moon, which occurs during the opposite half of the lunar cycle than the full moon (6). There was no restriction on menstrual cycle length, but the authors didn’t report the average cycle lengths of people in the study. This makes it hard to compare to the prior research.

Finally, three studies, from 2013, 1975, and 1937, found no relationship between menstrual cycles and the lunar cycle (7-9). These studies did not look at people with cycle lengths of specifically 29.5 days.

As noted by Dr. Wheeler in our study, about 1 in 2 people will have their period either around the new moon or the full moon, plus or minus 3 days. It’s possible that the studies that did find an effect were just capturing some random variation in the pattern Dr. Wheeler described.

The fact that the lunar cycle length and the average menstrual cycle length are basically equal is pretty interesting. It’s definitely possible that these two cycles aren’t related whatsoever, but just happen to be of similar length.

That being said, people have proposed reasons why the lunar cycle may be related to the menstrual cycle.

It’s been suggested that moonlight, particularly in the absence of artificial light, might have an impact on some of our biological processes. This idea isn’t unreasonable, as light has been demonstrated to have an impact on people’s bodies and reproductive systems.

We know that people who work night shifts are more likely to have irregular cycles (10,11), possibly due in some part to light exposure. Also, studies suggest that mimicking lunar light patterns may improve cycle regularity (12,13). People’s hormones are also possibly affected by changes in light due to the seasons (13), as we know from conditions like Seasonal Affective Disorder (which is thought to be related to the hormone melatonin).

Other theories have also been proposed. The author of the studies looking at people with 29.5 day cycles suggested that lunar electromagnetic radiation affects menstrual cycles (2). However, if we are sensitive to this radiation, it’s odd that we don’t see more of a trend towards lunar syncing among everyone, as opposed to only people with certain cycle lengths. Why these people are more sensitive isn’t explained.

The cultural and personal significance of the moon and menstruation

There are different evolutionary theories speculating why the human menstrual cycle length evolved to be so close to the lunar cycle in length. Stories and beliefs connecting the two are also found in various cultures and mythologies (14). The terms “menstruation” and “menses” even come from Latin and Greek words meaning month (mensis) and moon (mene) (14).

While the data from 1.5 million Clue users who were not using any form of hormonal contraceptives indicate that naturally occurring periods do not sync with the moon, many people still find that observing the lunar cycle in relation to their menstruation has meaning for them personally.

Wondering where superstitions about periods come from?

Download Clue to learn about your unique menstrual cycle.

Understanding the cycle is important for your overall health. We break down the phases and hormones of the menstrual cycle.