The menstrual cycle is more than just the period. In fact, the period is just the first phase of the cycle. The menstrual cycle is actually made up of two cycles that interact and overlap—one happening in the ovaries and one in the uterus. The brain, ovaries, and uterus work together and communicate through hormones (chemical signals sent through the blood from one part of the body to another) to keep the cycle going.

A menstrual cycle starts with the first day of the period and ends with the start of the next period. An entire menstrual cycle usually lasts between 24 and 38 days (1), but the length may vary from cycle to cycle, and may also change over the years. Cycle length changes between menarche (when periods first start during puberty) and menopause (when periods stop permanently) (2,3).

Understanding the menstrual cycle is important because it can impact the body from head to toe. Some people notice changes in their hair, skin, poop, chronic disease symptoms, mental health, migraine headaches, or the way they experience sex at different points in the menstrual cycle. It’s also the body’s way of preparing for pregnancy over and over again, so people having penis-in-vagina sex (the kind of sex you can become pregnant from) may want to pay attention to the menstrual cycle. Hormonal methods of birth control prevent some or all of the steps in the cycle from happening, which keeps pregnancy from occurring.

Read on for the breakdown of each phase of the cycle and what is happening in the uterus and in the ovaries.

Act 1: The first part of the cycle

When: From the time bleeding starts to the time it ends What: Old blood and tissue from inside the uterus is shed through the vagina

Each menstrual cycle starts with menstruation (the period). A period is the normal shedding of blood and endometrium (the lining of the uterus) through the cervix and vagina. A normal period may last up to 8 days (1), but on average lasts about 5 or 6 (4). 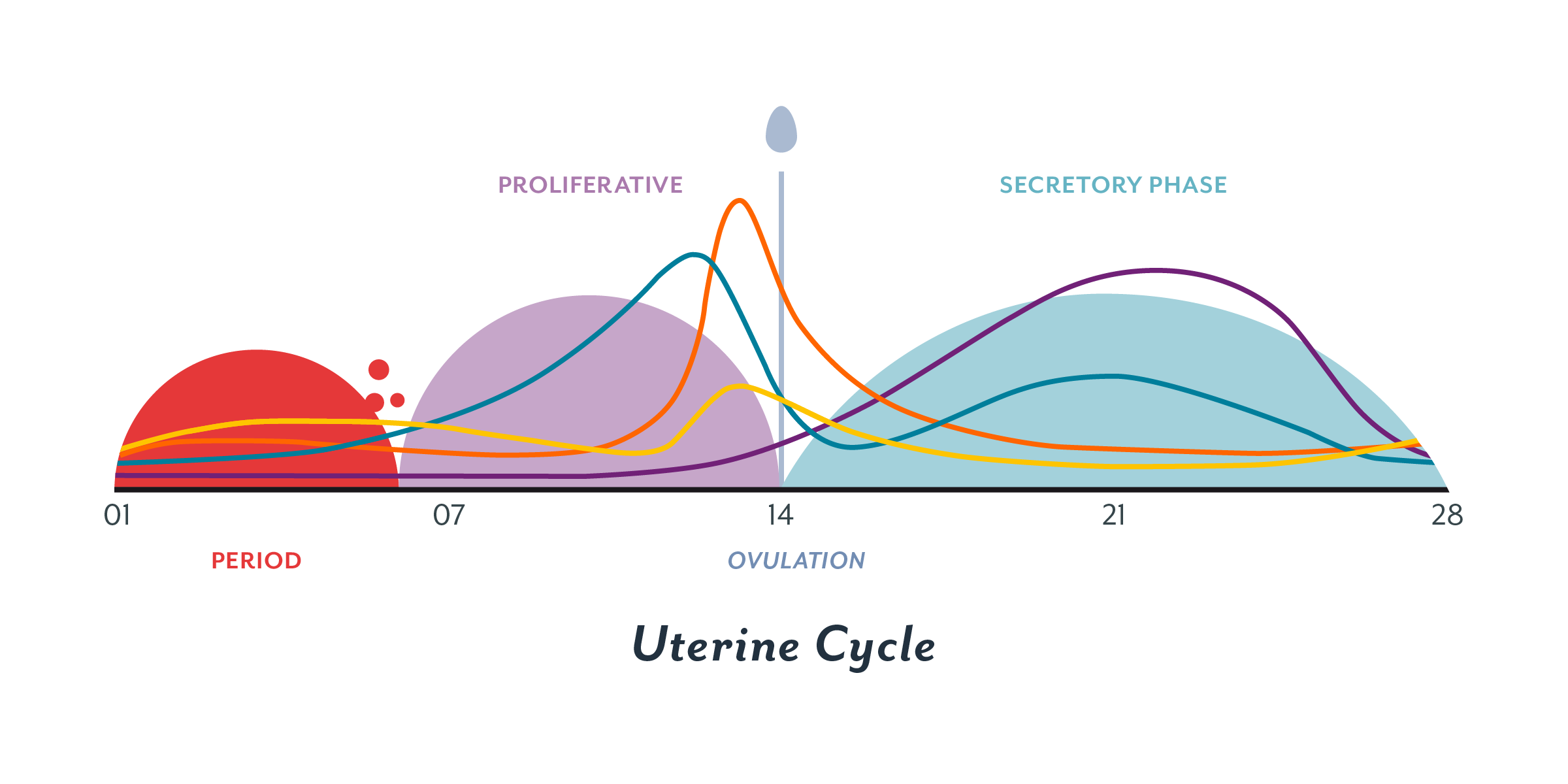 When: From the start of the period until ovulation What: Signals from the brain tell the ovaries to prepare an egg that will be released

During the period, the pituitary gland (a small area at the base of the brain that makes hormones) produces a hormone called follicle stimulating hormone (FSH). FSH tells the ovaries to prepare an egg for ovulation (release of an egg from the ovary). Throughout the menstrual cycle, there are multiple follicles (fluid filled sacs containing eggs) in each ovary at different stages of development (5,6). About halfway through the follicular phase (just as the period is ending) one follicle in one of the ovaries is the largest of all the follicles at about 1 cm (0.4 in) (6,7). This follicle becomes the dominant follicle and is the one prepared to be released at ovulation. The dominant follicle produces estrogen as it grows (8), which peaks just before ovulation happens (7). For most people, the follicular phase lasts 10-22 days, but this can vary from cycle-to-cycle (4).

When: From the end of the period until ovulation What: The uterus builds up a thick inner lining

While the ovaries are working on developing the egg-containing follicles, the uterus is responding to the estrogen produced by the follicles, rebuilding the lining that was just shed during the last period. This is called the proliferative phase because the endometrium (the lining of the uterus) becomes thicker. The endometrium is thinnest during the period, and thickens throughout this phase until ovulation occurs (9). The uterus does this to create a place where a potential fertilized egg can implant and grow (10).

When: About midway through the cycle, but this can change cycle-to-cycle. Ovulation divides the two phases of the ovarian cycle (the follicular phase and the luteal phase) What: An egg is released from the ovary into the fallopian tube

The dominant follicle in the ovary produces more and more estrogen as it grows larger. The dominant follicle reaches about 2 cm (0.8 in)—but can be up to 3 cm—at its largest right before ovulation (6,7). When estrogen levels are high enough, they signal to the brain causing a dramatic increase in luteinizing hormone (LH) (11). This spike is what causes ovulation (release of the egg from the ovary) to occur. Ovulation usually happens about 13-15 days before the start of the next period (12). 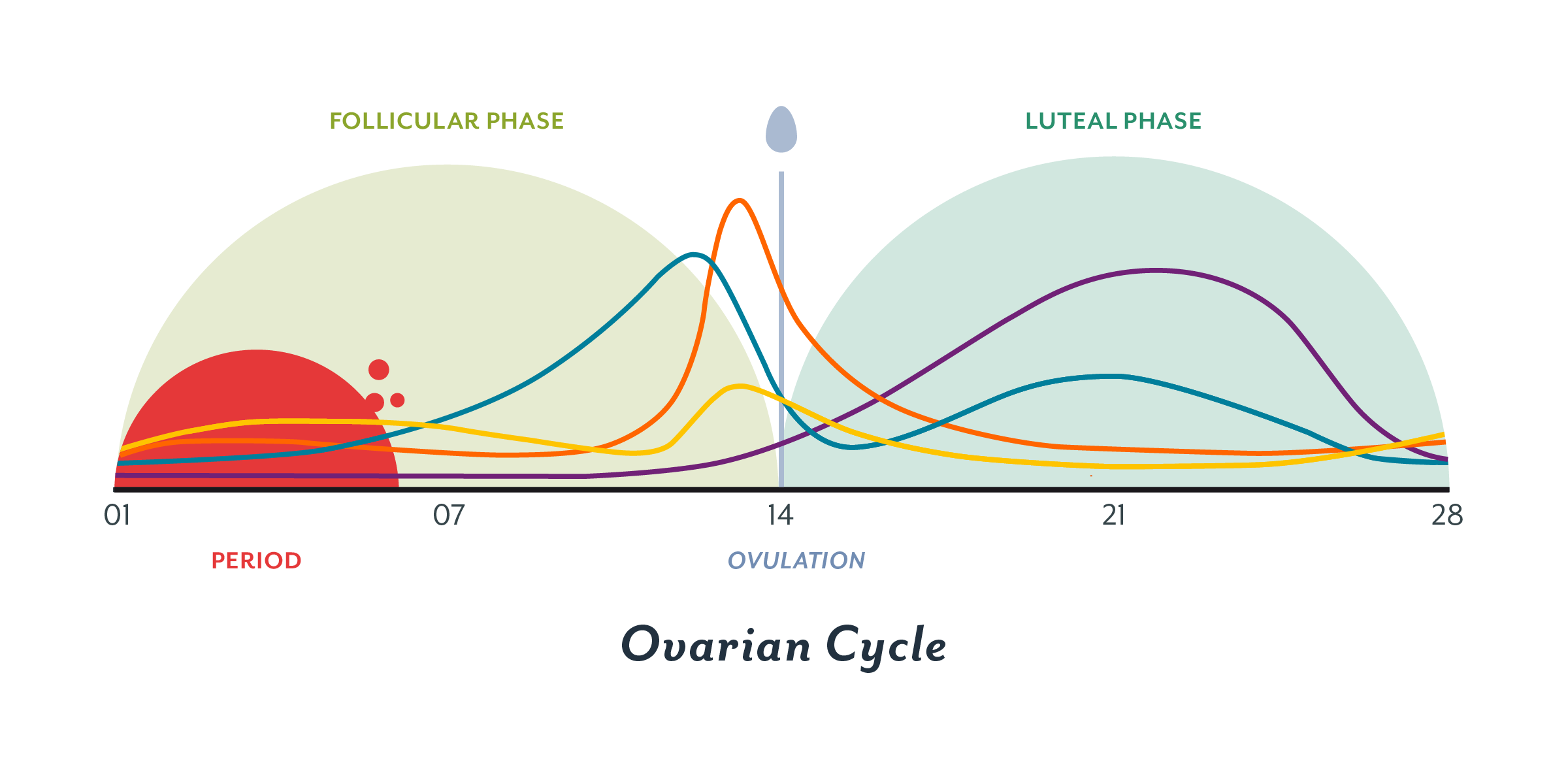 Act 2: The second part of the cycle

When: From ovulation until the start of the next period What: The sac that contained the egg produces estrogen and progesterone

Once ovulation occurs, the follicle that contained the egg transforms into something called a corpus luteum and begins to produce progesterone as well as estrogen (10,13). Progesterone levels peak about halfway through this phase (14). The hormonal changes of the luteal phase are associated with common premenstrual symptoms that many people experience, such as mood changes, headaches, acne, bloating, and breast tenderness.

If an egg is fertilized, progesterone from the corpus luteum supports the early pregnancy (15). If no fertilization occurs, the corpus luteum will start to break down between 9 and 11 days after ovulation (10). This results in a drop in estrogen and progesterone levels, which causes menstruation. The luteal phase typically lasts about 14 days, but between 9 and 16 days is common (4,12). 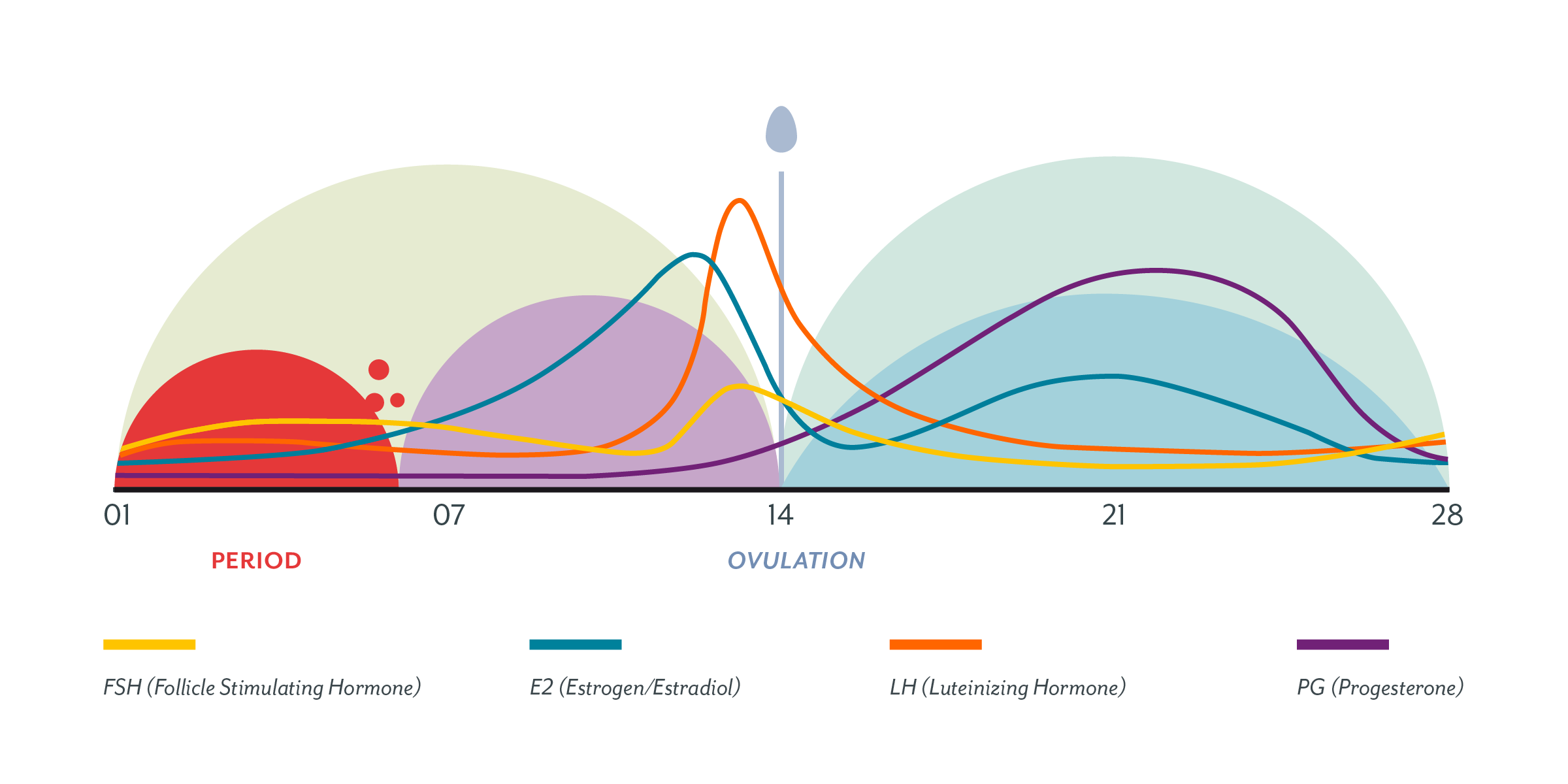 When: From ovulation until the start of the next period What: The lining of the uterus releases or secretes chemicals that will either help an early pregnancy attach if an egg was fertilized, or help the lining break down and shed if no egg was fertilized

During this phase, the endometrium prepares to either support a pregnancy or to break down for menstruation. Rising levels of progesterone cause the endometrium to stop thickening and to start preparing for the potential attachment of a fertilized egg. The secretory phase gets its name because the endometrium is secreting (producing and releasing) many types of chemical messengers. The most notable of these messengers are the prostaglandins, which are secreted by endometrial cells and cause changes to other cells nearby.

Two prostaglandins in particular called, “PGF2α” and “PGE2”, cause the uterine muscle to contract (cramp). The amounts of these prostaglandins rise after ovulation and reach their peak during menstruation (16,17). The cramping caused by this prostaglandin helps trigger the period. If a pregnancy occurs, prostaglandin production is inhibited (18) so that these contractions won’t impact an early pregnancy. If pregnancy does not occur, the corpus luteum stops producing estrogen and progesterone. The drop in hormones, along with the effects of the prostaglandins, cause the blood vessels to constrict (tighten) and tissue of the endometrium to break down (10).

Menstruation begins, and the whole cycle starts all over again.

Tracking symptoms throughout your menstrual cycle in Clue can help you feel more in control by helping you notice patterns and anticipate changes. It can also help you identify if something is out of the norm for you and seek the advice of a healthcare provider if needed.

Download Clue to track your period and menstrual cycle.