Emergency contraception (EC) offers people a last chance to prevent an unwanted pregnancy. It can be used after another contraceptive method fails, after unprotected sex or in the case of a sexual assault. Most types of EC are less effective than other forms of modern birth control, and they don’t protect against sexually transmitted infections. But EC is an important tool when you need it. It can make you much less likely to get pregnant, depending on where you are in your cycle and what type of EC you choose.

Here’s what you need to know about emergency contraception, including a look at the latest research:

When should I use emergency contraception?

You can consider using EC after unprotected intercourse when there is a possibility you could be fertile.

But knowing when you’re fertile can be tough. If you don’t want to get pregnant, it is best to err on the side of caution when considering emergency contraception. Officially, the fertile window is about six days long—from ~five days before ovulation, until 24 hours after ovulation occurs. But the timing of the fertile window can change cycle-to-cycle, and has been shown to be highly variable even for those who perceive their cycle as “regular” (1). Over 7 in 10 women may be in their fertile window before day ten in their cycle, or after day 17 (1). It also takes up to six years after someone first gets their period for cycles to settle into their adult 'norm' (2). Things like stress, sleep changes, jet lag and intensive exercise can also affect the timing of your ovulation, most often causing it to be delayed (3–5). Ovulation is also affected by any medical conditions that influences the reproductive hormones. Knowing the exact timing of your ovulation usually requires using at-home methods like basal body temperature tracking or an ovulation-detection kit, or tests done at your healthcare provider’s office.

If you are unsure if you are fertile or not, using an EC may be a good idea. Any method may be more effective than nothing (6). While EC is not for use as primary contraception, some people may choose to keep a pill (an ECP) on hand for backup in emergencies, so they won’t lose time getting a pill if they ever need one quickly. ECPs can be bought in advance at many pharmacies, medical clinics and online.

What are the options? 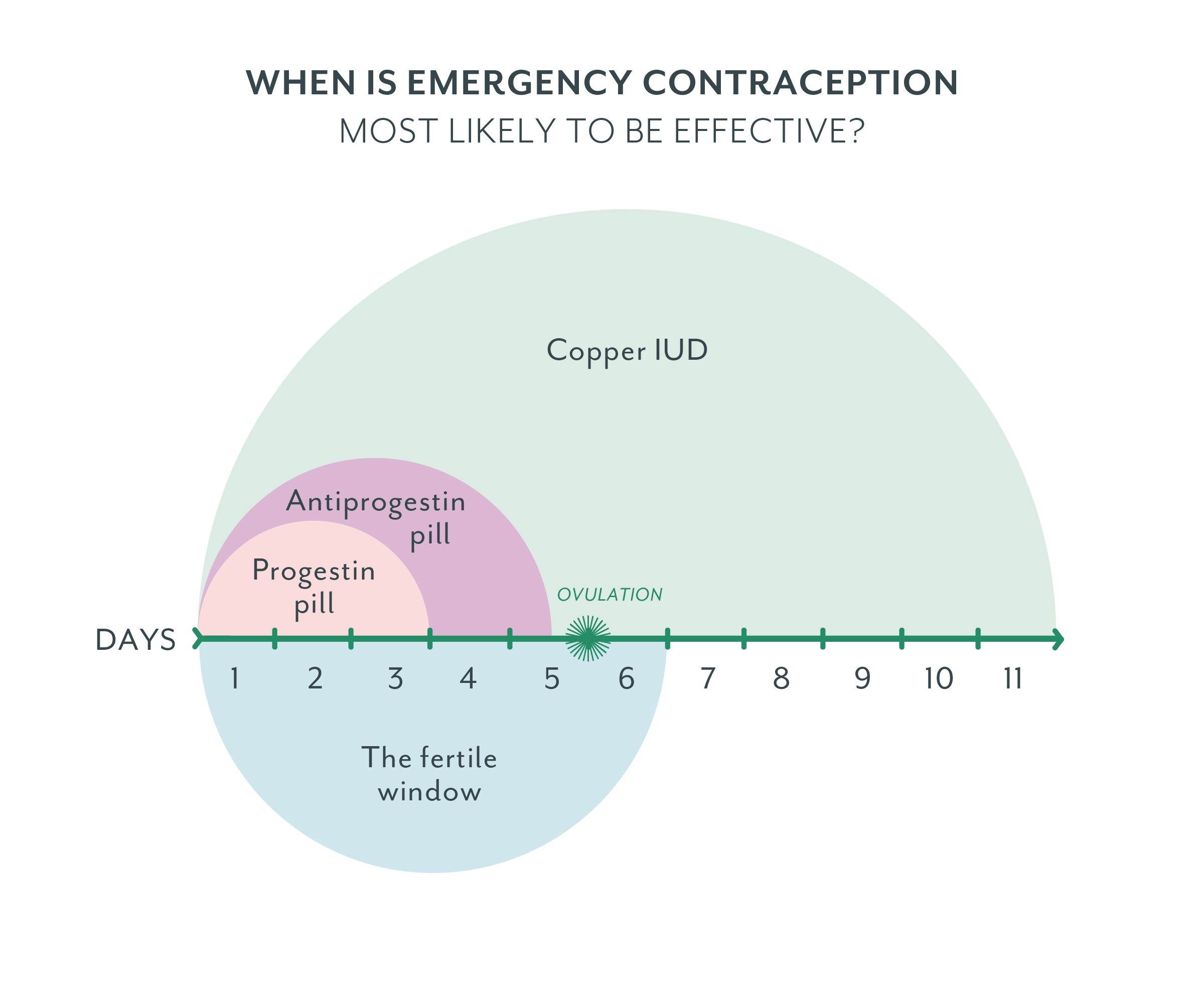 Emergency contraceptive pills are better known as “morning after pills,” although they might be better named “as soon as possible” pills. The effectiveness of ECPs primarily depends on where you are in your cycle when you take them — specifically, if you take a pill in time to prevent ovulation (7, 8 -11). There are two main types of ECPs available in the U.S.:

The most common type of ECP contains a version of the hormone progesterone, called levonorgestrel, and is marketed under brand names Plan B, Next Choice, One Dose, My Way, Take Action, as well as generic names. These are available from many pharmacies without a prescription. Levonorgestrel ECPs are taken in a single dose as soon as possible after unprotected intercourse. While the packages of these pills may stipulate that they should be taken within three days (72 hours), their effectiveness may last for at least four days (96 hours), before declining significantly (8, 11–13).

The other ECP, called ella, contains an anti-progestin called ulipristal acetate. ella is only available with a prescription, and is taken in either a single or split dose. ella is considered to be the most effective type of ECP and may be effective if taken until at least five days (120 hours) after unprotected intercourse (7, 11, 14).

When no other method is available, it is possible to use some types of daily-use oral hormonal birth control as emergency contraception. While not all brands can be used this way, many have specific instructions about use as emergency contraception. These pills are “combined pills” containing a mix of estrogen and progesterone. Multiple pills are usually taken in two doses — one dose within 4–5 days of unprotected sex, and another 12 hours later. This method has been shown to be less effective than other ECPs (10), and can cause stronger side effects than other pills, such as nausea and headaches (15–20). Nearly 1 in 5 people may vomit after using this method (15).

Copper IUDs are the most effective form of emergency contraception (24). They are small devices, inserted into the uterus to prevent pregnancy. They’re a long-lasting contraceptive, and can stay in the body for up to ten years (25). This means you can get a copper IUD inserted as an EC, and then leave it in for continued contraceptive use.

Copper IUDs can be used as emergency contraception if they are inserted into the uterus up to five days after ovulation (24). Since the exact timing of ovulation is difficult to know, most sources recommend inserting the IUD up to five days after unprotected intercourse to ensure it will be effective and safe (23). Hormonal IUDs, which are different than the copper IUDs, do not work as emergency contraception. Copper IUDs cannot be inserted in the presence of certain active sexually transmitted infections. They are inserted by medical professionals in a clinic.

How (and how well) do they work?

Emergency contraceptive pills primarily work by blocking or delaying ovulation (7, 8, 26–31). They change the body’s hormones to prevent the release of an egg from the ovary. When ovulation doesn’t happen, sperm cannot come in contact with an egg. While an egg can only be fertilized by sperm for about 12–24 hours after ovulation happens, sperm can lead to a pregnancy for up to five days after it enters the body (32). One study found that sperm may be able to live up to seven days (as observed in human cervical mucus stored in a lab)(33), but there is no evidence of it ever leading to a pregnancy after 5. It’s in this pre-ovulatory part of the fertile window that ECPs can be most effective, or perhaps effective at all (23, 30,31). This means there are 1–2 days at the end of each fertile window when an ECP is significantly less likely to work (around days seven and eight on the image above).

If you have unprotected intercourse several days before your ovulation and take an ECP, your chances of getting pregnant are much lower than if the same were to happen one day before ovulation (11, 30, 31). This is why ECPs should be taken as quickly as possible after unprotected intercourse — if an ECP is taken very close to ovulation, the hormones in the pill may not be able to prevent it, and you have a much higher risk of pregnancy.

If your ovulation is days away, a levonorgestrel ECP and ella are both good choices (11, 23). ella, the antiprogestin pill, has been shown to be significantly more effective than other ECPs at preventing ovulation shortly before it happens (7, 10, 11, 14, 29, 34, 35). This means you may be safer choosing ella (or a copper IUD) if you think you are a day or two before your ovulation, or if you are taking the pill 4–5 days after unprotected sex (23). If you don’t have access to ella or an IUD during that window of time, you can still take another type of ECP, but it may not be effective.

There has been a lot of speculation about the effectiveness of ECPs to prevent pregnancy after ovulation. Some studies suggest that ECPs may prevent an egg from being fertilized, or prevent a fertilized egg from effectively implanting in the uterus wall (28, 36, 37). Despite speculations and research, there is still no conclusive evidence that ECPs are effective at preventing pregnancy once ovulation (or fertilization) has occurred (12, 23, 30, 31, 36–38). In two recent studies of levonorgestrel ECPs, people who took the pill on or after the day of ovulation had the same number of pregnancies that would be expected in people who took nothing at all — about 1 in 3 (30, 31).

Unlike ECP, copper IUDs are very effective at preventing pregnancy both before and after ovulation (at the end of the fertile window). A copper IUD will work by preventing sperm from fertilizing an egg, or, if an egg is already fertilized at the time a copper IUD is inserted, the IUD will prevent the fertilized egg from implanting in the uterus. With only 7 known failures in thousands of cases,

Note: If you think you are right around the time of your ovulation, and don’t have access to a Copper IUD, take an ECP.

Any method may be more effective than nothing, and it is easy to misjudge the timing of your ovulation (6, 23). If you suspect you may be pregnant, make an appointment with your healthcare provider — you should no longer take an ECP or have a copper IUD inserted after pregnancy.

What are the side effects?

The side effects of ECPs can include headaches, abdominal pain, breast tenderness, dizziness, and fatigue, nausea and vomiting (12, 15). If you’re prone to nausea, it can be a good idea to take an ECP with an anti-nauseant medication. If you vomit within two hours of taking a ECP, talk to a healthcare provider, as you may need another dose. Side effects often go away after about a day. Side effects tend to be stronger in combined-hormone ECPs (15). If you you are worried about any side effects after taking an ECP, talk to your healthcare provider.

Some people wonder if there are any side effects to using ECPs frequently. While ECPs should not be used as someone’s primary method of contraception, repeat use is unlikely to cause serious harm and is safer than pregnancy (23, 34). ella does specify that it is not recommended for use twice within the same cycle (39).

Most people who take emergency contraception get their next period sooner than expected, but it may also come slightly later (40–42). ECPs can also cause light spotting (non-menstrual bleeding).

People who don’t get their next period around the expected time should check for pregnancy. It is common for the second cycle, and period, to be slightly longer after taking an ECP(40–42).

Taking an over-the-counter ECP if you are already pregnant has not been shown to cause harm to the fetus (43, 44), but ECPs are not for use in someone who is already pregnant.

The side effects of a copper IUD insertion include pain and spotting (47). Some people may experience changes to their menstruation while the IUD is in place, and in some cases the IUD may be expelled through the vagina (48). These symptoms and side effects should be discussed with a medical professional at the time of insertion.